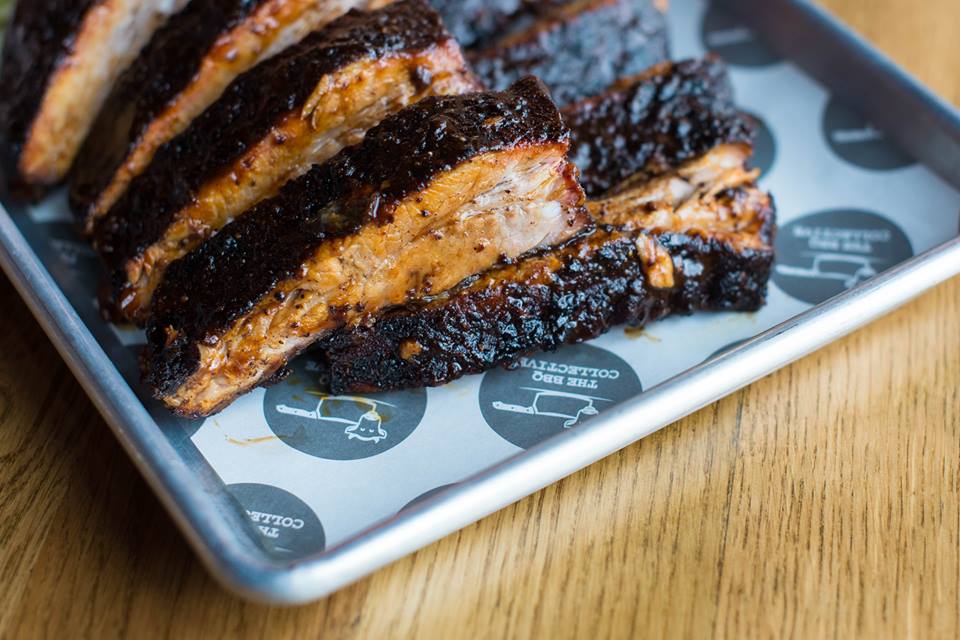 Last Wednesday we were invited to attend the BBQ Collective’s, ‘BBQ and Brewers Night’, in collaboration with another Sheffield favourite, The Hop Hideout. Each month sees the BBQ Collective team up with one of the best breweries in the region, to feature their selection of craft beers to pair with a carefully devised menu of smoked meat. This month was a little different as the beer side of things was expertly curated by Jules Gray of Sheffield’s specialist craft beer and cider shop, Hop Hideout. Not to mention pairing the music to go with the menu too!
Located in The Hop Sheffield, where the BBQ Collective have held a residency since August 2015, this monthly event sees guests seated together on two communal long tables to allow for an interactive and lively evening as they move through each course. Mat (BBQ Collective) and pit master Executive Chef Jeff talked us through each dish before handing over to Jules to explain the beer and how it was chosen to be paired with the food.
First up for the evening was a starter of ‘Chicken Liver and Smoked Porcini Paté with Pickled Apricots and Hazelnut Brioche Toast, paired with Helles Schlenkerla Lagerbier (ABV 4.3%, Brauerei Heller Bamberg)’. A perfect way to start the evening, the pate was light and creamy, not too heavy on the smoked porchini, with subtle pickling on the apricots to lift the dish. Paired well with the subtle smokiness of the Bavarian lager beer. 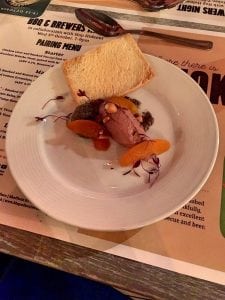 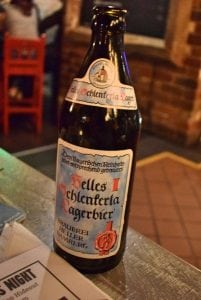 Second course, ‘Cured, Smoked and Seared Pork Belly, Brown Ale Barley Risotto with Charred Lemon Gremolata, paired with Gose German-Style Sour Ale (ABV 4.3%, Reuben’s Brews)’. The belly pork had been cured for six days before being placed in their imported in-house smoker, then searing. The super smoky, tender pork with spiced crust worked perfectly with the garlicky gremolata, also the brown ale pearl barley gave a great texture to the dish. Not to mention the pairing of the beer, quite a heavy hit of salty sourness and also a hint of lemon that went down a treat with the pork and gremolata. 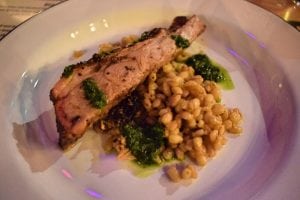 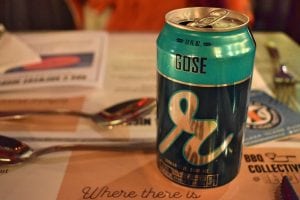 Our third dish of the evening was “Tacos Carnitas” – Smoked Pibil Pork Shoulder served in Corn Toritillas with Smoked Tomato Salsa, Pickled Jicama and Lime Crema, paired with Two Roads Worker’s Comp Saison (ABV 4.8%, Two Roads Brewing Company). A huge serving of pulled pork arrived to the table to share between four guests, along with corn tortillas and Jeff’s homemade salsas. The smoked tomato salsa really was on another level, adding a real earthy depth to the smoke and heat of the pork shoulder. The fruitiness of the pickled Jicama which is a bit of a cross between a radish and an Asian pear, cut through the heat and smoke to lift the dish even more. Easily some of the best tacos we’ve had in a long while. Jules absolutely nailed the pairing with a real fruity, slightly spicy American farmhouse ale that complimented the elements of the taco perfectly. 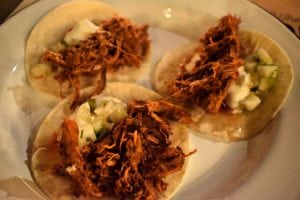 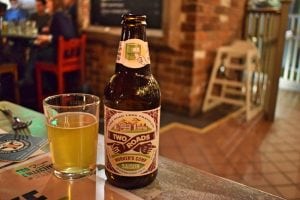 Our forth and I’d say my personal favorite of the night was the ‘USDA Prime Beef Brisket with Texas BBQ Sauce and Chilli and Cheddar Polenta, paired with Verezzi (ABV 8.9%, Marble Beers).’ The black angus brisket was placed in the smoker for 14 hours then served with a duo of Jeff’s homemade sauces and a generous portion of cheddar polenta. The meat had an amazing bark from the slow cooking of the smoker that added a great texture to the outside and also kept the meat inside tender and juicy. The black angus is the king of meats for brisket and you could tell this in every bite, all the outer fat rendered down to baste the meat and add extra juice and flavor. A great combination with the creaminess of the cheddar polenta and the duo of sauces that added extra smoke, heat and flavor. Jules pulled out the big guns for such a bold dish with Manchester’s marble beers, Verezzi. An old ale aged in olorosso sherry barrels, a really deep and rich beer with a slight warmth picked up from the sherry barrel. This pairing was like a great steak and glass of red but a completely different level of complexity. 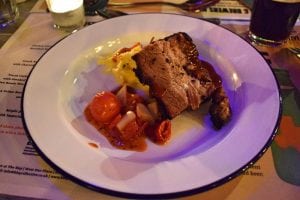 Last but definitely not least and a really anticipated dish was dessert. ‘Maple pecan ice-cream cone and chocolate soil, paired with Imperial Biscotti Break (ABV 11.5%, Evil Twin Brewing)’. Homemade Canadian maple pecan ice cream, another one of Jeff’s excellent creations, served with a homemade ice cream cone, chocolate soil and smoked cherry coulis. An absolute winner with the creamy ice cream and the texture of the chocolate soil then the sourness of the cherry to cut through the ice cream. Jules really saved the best till last for us when it came to the pairing. Brooklyn’s ‘Evil Twin Imperial Biscotti Break’, an American double / imperial stout style beer, big hints of coffee, vanilla and almond worked perfectly with the maple pecan creamy ice cream. Combined together like the most amazing affogato. 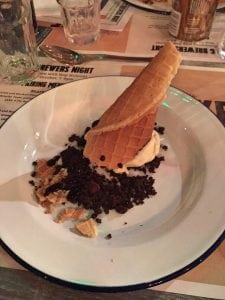 The music selection was really on point with some never before heard tracks, ranging from old funk and soul to hip hop classics. As the plates cleared we were treated to a music quiz from Mat and the winner received vouchers to spend at the BBQ Collective and Hop Hideout.Both parties put in a great effort to make the night a real experience. We’re really looking forward to seeing what the BBQ Collective have up their sleeve for next month’s event. 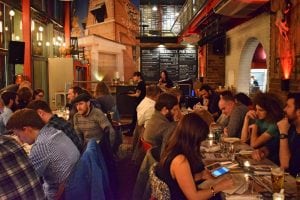