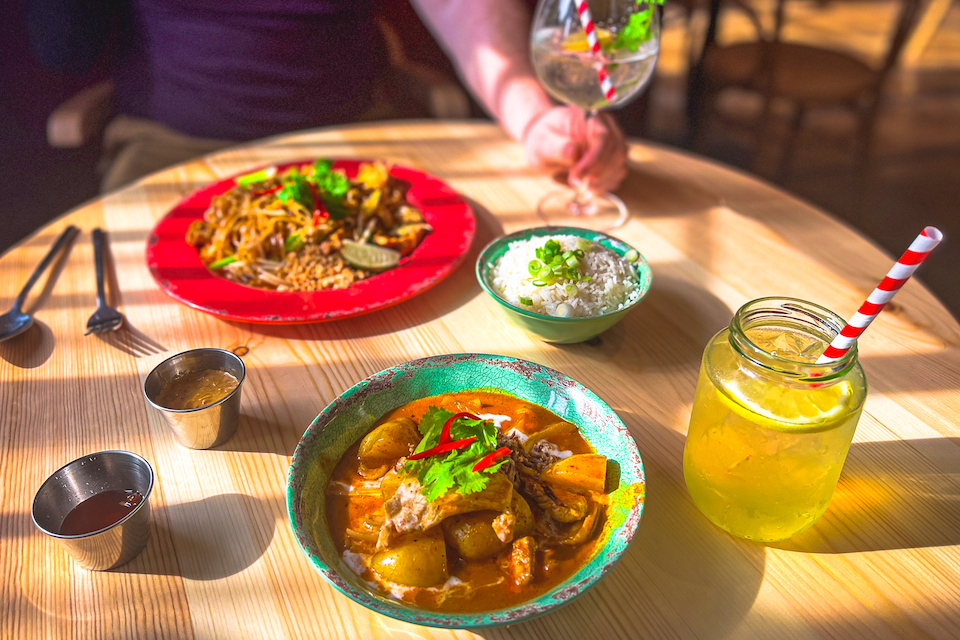 From Thailand, via Hong Kong and an old greasy spoon in East London, Rosa’s Thai Cafes are setting up shop all across the country. There are now over 30 restaurants, with Rosa’s having recently opened in three new locations (King’s Cross, Cardiff, and York) to plenty of praise. And it’s not surprising given founder Saiphin’s drive for business… As a young girl growing up in Thailand, she launched her first business selling home-grown produce. By the age of 13, she’d sold enough coriander to buy a motorbike and expand her deliveries. And she hasn’t stopped since.

From the East to the East End

Owner Saiphin and her husband Alex took over an old-school British cafe on Hanbury Street, London back in 2008. Out of respect for the history of the area, they decided to keep the name (that, and the fact they didn’t have the budget for a new sign).

From location to location, don’t expect a one-size-fits, Golden Arches approach. The name above the door is the same, but each venue sports unique signage, in keeping with the local area. Their new cafe in York is no different. The way they’ve incorporated the exposed beams and heritage characteristics of the building with modern interior trends makes it feel much less like a chain, and much more like Rosa’s has always been nestled into Coney Street.

Food made for sharing

The menu encourages you to ‘eat Thai style’, sharing various plates, so we gladly oblige, ordering a selection of dishes to tuck into. With an unfortunate pineapple allergy, the team at Rosa’s are on hand with advice, and happily swap out the dipping sauces I can’t have for a sticky peanut dip that I gladly dunk crackers into, along with anything else I can get my hands on.

The Sweetcorn Patties are an instant hit. Fresh from the fryer, they’re seriously crispy on the outside, with hints of lemongrass, turmeric and citrus. The Summer Rolls aren’t as colourful as you might expect, but they’re full of flavour, and that dipping sauce has a serious kick. It’s the Honey-Marinated Pork Skewers that take the top spot though. That tart Tamarind sauce coats the pork and mingles with the sweet honey and earthy roast coriander seed. It’s a ‘must order’ when you eat at Rosa’s.

The main menu of Thai classics

The Pad Thai at Rosa’s Thai York is a generous portion, heaped with fresh ingredients. They don’t shy away from the garnish, and whilst I could go for a healthy extra glug of fish sauce, it’s a reliably good classic serving.

The Massaman though, that’s something to write home about. Rich and creamy as you’d expect, but with so much more depth than you get from the usual UK offering. Poured over the coconut rice, close your eyes and you’re almost beach-side in Krabi, eating with the locals. Except Rosa’s are making the most of seasonal ingredients from the UK and the British Isles, so it’s nutty jersey royals you’ll find swimming in that rich sauce. This dish is the kind of comfort food that could nurse you back to health. Serve that sauce in a cup and I’m convinced you could save the NHS a fortune…

As much as I love Mango and Sticky Rice, we’re just too full for pudding, so we settle up and head out into the streets of York.

All in all, it’s a very satisfying meal, at a very reasonable price point. It’s easy to see why Rosa’s Thai Cafes are becoming a staple in cities across the UK. Rosa’s Thai is another great addition to York’s thriving food scene.

10 of the best hotels in York city centre