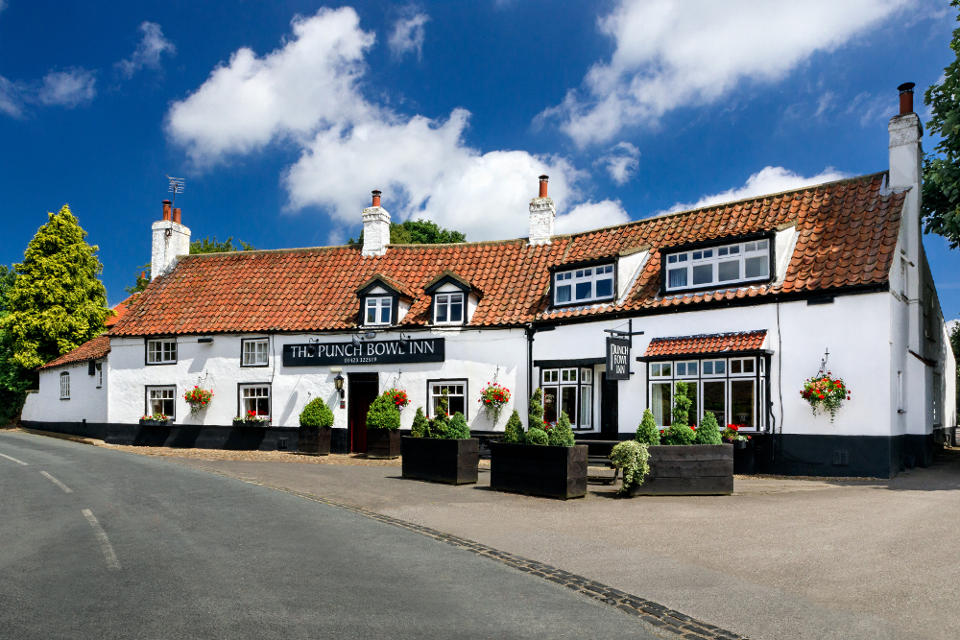 Sixty years since owner Eddie Shine earned his place on British Pathe News, The Punch Bowl Inn is once again a destination for vintage cars and motor enthusiasts. The footage shows the jolly deerstalker capped proprietor inviting famous racing drivers of the day into his bar, adorned with rally plates and souvenirs. There were chandeliers made of old steering wheels, classic petrol station beer pumps; even the carpet has vehicles on it. Today the pub is just as full of character and the staff just as welcoming.
Like the other Provenance Inns and Hotels, The Punch Bowl really feels like a village pub at the heart of the community, with the regulars at the bar likely to have been those that have brought in the game for the pie special. The title of Director Chris Blundell’s small group of seven sites surely rings true, fostering their belief in farmers bridging the gap between “earth and table, seed and sustenance.” Look out for Provenance’s nifty Passport, a kind of loyalty card where you collect stamps for any a la carte main course across the likes of West Park in Harrogate and the Black Bull at Moulton – not that you’ll need a reward for sampling produce as local as this.
Spilt into little dining rooms, which can be made private on request, all crimson walled and candlelit, every table is as cosy as the next. The warmth of the wintery open fires can be felt from every corner. The pub was full on a Saturday night, so full in fact that as we’re seated, the wonderful waitress alerts us to the fact that we might be just in time to bag the last of the partridge specials. They’re also already fully booked for Christmas Day, and if you’re one of those families that goes out for a feast, I bet this is an absolute festive celebration and a half. Just looking at their menu fills us with cheer, as do the reasonably priced specials, which I recommend you inspect first. After a few slices of olive bread, with local rapeseed oil and sticky balsamic, we order the Black Pudding Scotch Egg off those daily chalkboards. It’s soft and well seasoned, a light crumb encasing two golden yolks, with a spoonful of apple chutney. Our other Starter, the Roast Pumpkin Risotto, is golden yellow too, a rather soupy rich bowl of comfort, topped toasted seeds and pea shoots. On to that Partridge special, a proper seasonal dish with succulent breast, confit leg and black pudding bonbons. Even the shot found in the Partridge adds to the level of authenticity of such a fine English pub at the height of shoot season. 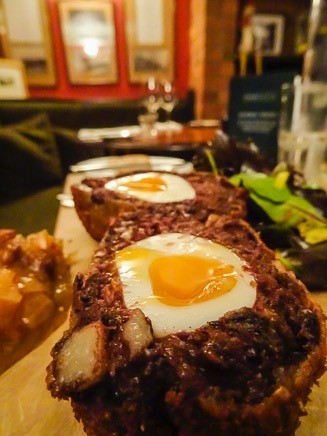 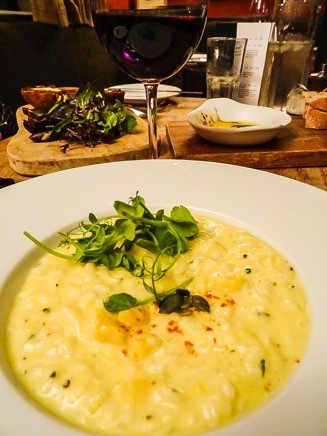 Tempting still was the Game Pie, with Juniper, Bay, Watercress and Jus, but having enjoyed the fish option at The Carpenter’s Arms, the Salmon Special sounded good to me. With a peppery skin, crunchy tenderstem broccoli and honey glazed squash, it was basically all my favourite things on a speckled square plate. Even more pleasing was the ample amount of tartare offered alongside. In fact, the only thing I didn’t want on the plate was a napkin, folded under the ramekin, and once saturated, easily bound to the fork. 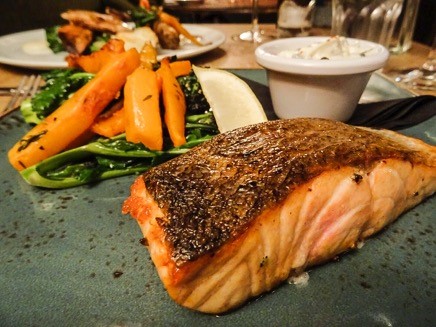 On the pudding front, they’ve got all the winners: Pear & Blackberry Crumble, Vanilla Cheesecake, Apple Tart, but for a cold evening in November, it had to be Sticky Toffee. With a scoop of Cinder Toffee Ice cream melting into the pool of sauce, it’s wickedly sweet. For a lighter choice, there’s a tropical Trio of Ryeburn of Helmsley Sorbets and Affogato with a gorgeous homemade biscotti. With your teas and coffees, don’t miss their cocoa dusted petit fours to top off the meal. 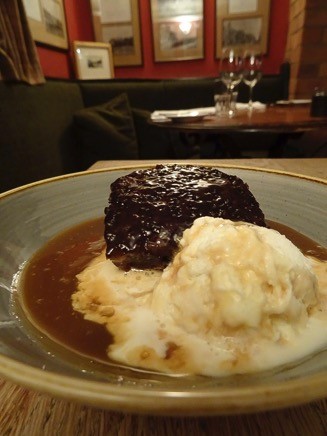 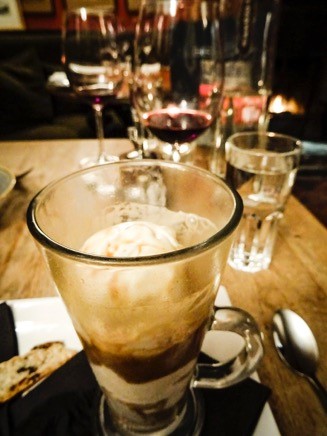 The drinks list includes the finalists from Provenance’s August cocktail competition, with barman Rob’s Slingsby Rhubarb Gin and Raspberry Crumble concoction gaining first place on the leaderboard. You can try your hand at mixology at the end of the month at their Festival Cocktail Masterclass, a chance to taste the latest yuletide creations and dazzle your friends and family at home. It’s obvious how serious they are about their wines and spirits, with the outstanding La Brouette House bottle a real credit to the menu, and a choice not to be overlooked.
Motoring back down the Great North Road, which runs parallel to the A1, you can see why it’s an ideal spot for Club Retro Torque rally meets, continuing in the tradition of the pub’s car-crazed ancestry on the third Saturday of every month.
With British fare this thrilling, whether you own an engine or not, the Punch Bowl Inn Marton really is a destination worth the ride.