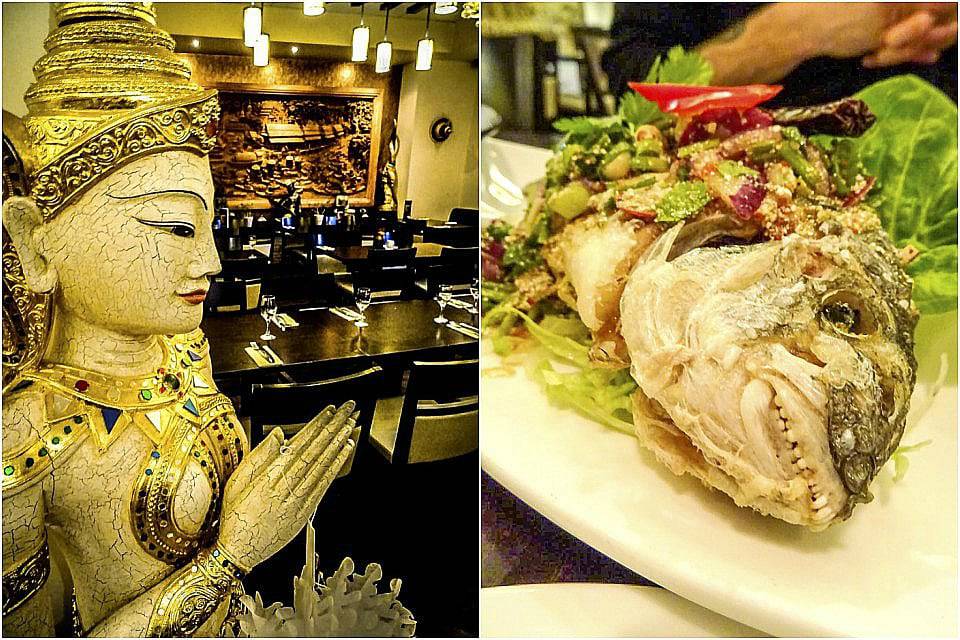 I was having a debate with my plus one before our reservation, over which wins out of Thai, Chinese and Indian food, with me championing Thai for its bright complex flavours and crunch. On Cheltenham Parade, towards the North edge of Harrogate, you can take your pick of the lot, with Cardamon Black at one end, Tah Chang at the other, and right in the middle – Sukhothai. One of four restaurants opened by owner and executive chef Ban Kaewkraikhot, this institution has been bringing those complex flavours, inspired by the street markets of Bangkok, direct to it’s loyal Yorkshire customer base. A customer base, who often dine, week in, week out, one that has grown familiar with Ban’s signature dishes and creative presentation, and also a customer base that doesn’t like change. And that’s precisely why it’s taken fifteen years for Sukhothai to summon up the courage to give their menu a bit of a revamp, and thus precisely why we are here. 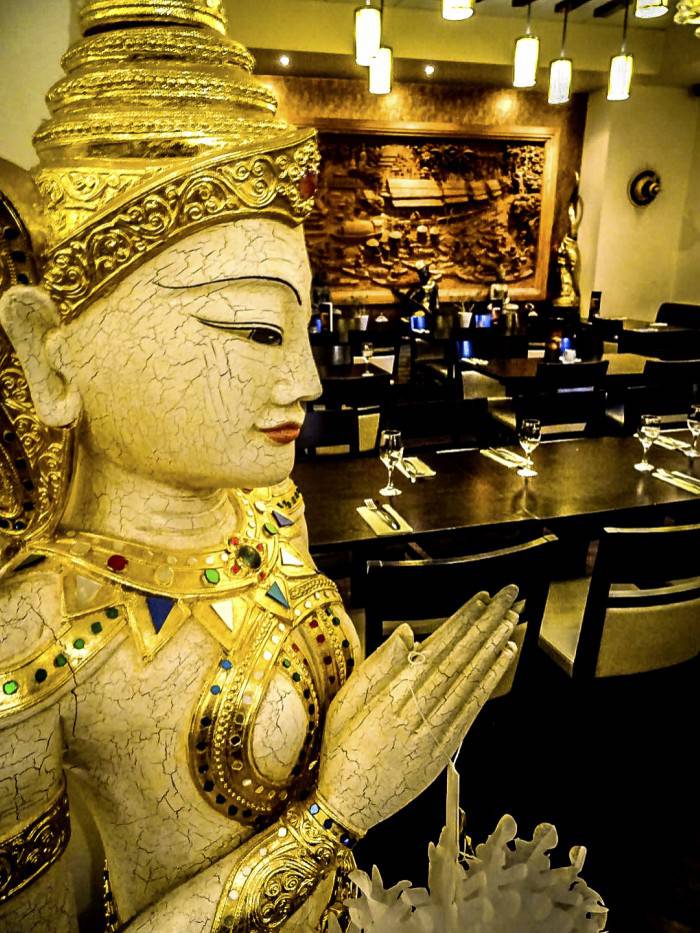 The restaurant is fairly large, but partitions, ornate with golden Hindu icons, make it not feel too expansive. There are hanging bubbles on an invisible string, and cylinder lamps below a mirrored central grid, so the space twinkles in the evening light. The mix of diners is evident; a group of businessmen on one side, a 50th birthday party on the other, a couple that should probably be doing their homework at this time on a Wednesday night. Sizzling plates go flying past, great plumes of smoke billowing behind the waitresses, who seem to pull off casual and entirely focused at the same time. Ganesh greets you at the door, decorated with significant offerings; coins, waterlily candles, he’s even been given a Yakult with a straw. Prayed to when people are starting a new business or enterprise, I hope they won’t be needing his blessings too soon with this menu makeover.

The cocktail list is extensive, some classics, some with a Thai twist. We go for two of the new options, a Bramble, with Beefeater gin, lemon, blueberry liqueur; sweet and fresh, topped with crushed ice and a bamboo skewered lemon and strawberry slice. Apparently, there’s no cotton candy left for the Lancastria, which is unexpected, as it’s not advertised on the menu. We’re now even more gutted it’s not available. The Siam Southside does as a back-up, the kaffir lime leaves a nice blend with the mint, in what seems to be a mojito in a coupe glass. The prawn crackers to go alongside, are crunchy and fishy in equal measure. The sweet chilli sauce what you’d hope it to be.
New additions to the starter menu include; ‘Gung Ta Krai’ king prawns in a crispy, fragrant lemongrass batter and ‘Kor Moo Yang’ traditional Thai grilled pork neck, marinated in honey and oyster, served with a spicy tamarind sauce. Tempting. In the spirit of trying as much as we possibly can, the Sukhothai Sharing Platter seems wise, and we’re told it’s been tinkered with, some bits added, some taken away. Unfortunate for die-hard platter fans, but as this we are not, we steam ahead. It is a platter and a half – well plate, in fact, a huge steering wheel of a plate, decorated with slivers of radish, pickled carrot crinkles, and long chives. Everything’s a bit squishy, the Thai fish cakes the consistency of tofu, the satay chicken, like eating Quorn. Don’t bother with the chicken spring rolls. The sweetcorn cakes are the tastiest, especially dipped in the peanut sauce.

They’re doing a fair amount of takeaway trade, cardboard packages piled high on the pass, waiters rushing bags to the entrance area. There’s a pang of jealousy as they go by, imagining a night in with a takeaway, but I check myself – you wouldn’t get the full effect at home, half the beauty of these dishes is in how they’re served. Steamed coconut rice wrapped up with banana leaves, curries inside a spring roll shell, coriander scattered on top – and our mains; The ‘Massaman Kaa Gae’, a towering lamb shank stood upright in a wide matte black dish, a leaf of purple chard poking from the marrow. The ‘Laab Bream’, a whole fish covered entirely with an Isaan-style sauce of spring onion, shallots, mint, lime leaves and chilli, laying with a toothy grin on a bed of romaine. The brown rice, which is sticky and clags how I like it, comes in a white porcelain boat. The side plates are branded triangular plectrums. You’d miss out all the lovely detail with a foil tray.

Just as we tuck in, distant drumming becomes louder, there’s much clapping and whooping, a whole procession of staff in satin singing to the birthday girl. The waiters are much better at the xylophone than customer service. They had reeled off a list of the new dishes for us- the ‘Roaring Rib-Eye’ sounded good, a cut of steak the chef’s hadn’t experimented with before, served on a bed of Thai morning glory (hopefully the vegetable) and topped with an exotic Panaeng curry sauce. I nearly picked the ‘Dancing Mushrooms’ – a salad of white jelly, black jelly and Enoki, in a specially made Thai dressing. I’ve never had dancing mushrooms before, but as the tender lamb falls off the bone into the creamy Massaman curry sauce, I know I’ve made the right decision. The star anise and cinnamon are warm and heady, the chunks of white onion a little heavy-handed, but the meat is gelatinous in all the right senses, and slow cooked to perfection. The Bream has a real fiery kick, also cooked expertly, and a great example of those complex flavours I was after.
With the new dessert menu launching next week, it’s definitely worth checking out Sukhothai this Spring, and you’ve got plenty of choices, with branches in Leeds city centre, Chapel Allerton, Headingley and Harrogate. Despite a few hitches with the starters, it’s clear the kitchen team are able to take Thai market ingredients and elevate them to restaurant standard, even if the service has some catching up to do. As the birthday party proved, this would be a great place for a special celebration, plus in my book, Thai always wins.

Sign Up to our Newsletter – For the latest news, exclusive offers, reviews and competitions.