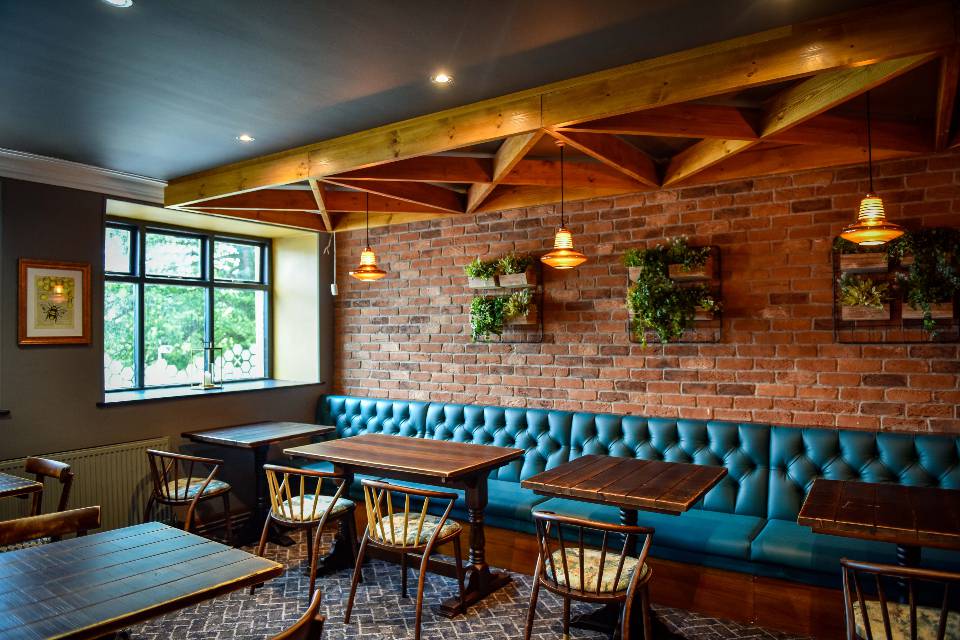 Yorkshire Food Guide meets Alex Farolfi, Head Chef at The Beehive Thorner gastropub, to get the latest on his plans to revive the wild food revolution.

The ancient parish of Thorner is every bit the picture-postcard Yorkshire village. White shutters and window boxes swinging from stone-built cottages. An embattled church tower peeping over a humpback bridge. An active cricket club, a Sunday league football team, and a Post Office that opens for two hours on a Thursday. Winding through the open fields, it’s hard to believe you’re less than a /ten-minute drive from the centre of Leeds, just off the A1 and A64 trunk roads. With Thorner’s listed buildings steeped in Anglo-Saxon history, it’s the perfect antidote to the city grind.

“I want people to be able to go for a country drive on a weekend, and have some good pub food.” Four months into his first Head Chef role at The Beehive, Thorner, it’s quickly evident there’s more to Alex Farolfi’s ambition than “good pub food”. Busy constructing a kitchen garden and new decking out the back of the car park, wings are in flight for a self-sustaining future for The Beehive Thorner. The team are planting, composting, even devising plans for an on-site apiary. It’s a vision that has kept the young chef going, through what must be one of the most challenging periods for the hospitality history in decades.

Since the Beehive Thorner reopened, Alex has had to cope without a full brigade behind him. They’ve even set up accommodation above the restaurant to entice staff back to the trade. But limited resources have not dampened his appetite for a menu packed with local ingredients, and his passion for seasonal produce shines through each and every dish. In fact, it seems no coincidence that Alex has landed a role at The Beehive Thorner. The name of the village is derived from the Medieval Tornoure, meaning Thorn Bank, and with foraging his number one hobby, this chef is in his element.

“There’s meadowsweet growing over that wall”, Alex tells us excitedly, pointing out of the window. “Most people don’t know that it’s British vanilla.” His campaign to introduce diners to new ingredients on their doorstep is showcased throughout a selection of ten small plates on the menu, bringing a subtle twist to classic favourites. Along one side of the pass, giant glass jars bubble with gelatinous scobies, and pickling juices float with languid vegetables. These traditional methods of preservation help to infuse sauces and oils, prolonging the life span of seasonal ingredients. Expect to taste wild garlic foraged in springtime, humming through your Christmas gravy.

Talking of gravy, each protein on the Beehive Thorner family-style Sunday roast dinner has its own dark, rich nectar to stream over your choice of grain-fed chicken, salt-baked celeriac, spring leg of lamb, or twenty-eight-day dry aged rump cap. Even the crispy Timothy Taylor battered plaice, which is fried to order, comes with chips cooked the old school way, in beef fat. Alex’s attention to detail ensures no corners are cut, with focaccias, crackers and chutneys all made in house. Butter is churned from Holmfirth’s Longley Farm double cream, and the cheese board features Leeds Blue and Pecorino from Adel.

Despite being brought up in the region, it’s not all Yorkshire on the plate. Head Chef Alex was born in Greece and introduced to Mediterranean flavours at an early age. His late father owned an Italian Restaurant in Knaresborough, where, under the Viaduct, he used to wash pots in return for a prized tub of gelato. Years later his impressive CV includes working alongside Paul Burgalieres at L’Enclume, and Shaun Rankin at Grantley Hall, where a sense of freedom allowed him to experiment with state-of-the-art laboratory equipment. At L’Enclume, his days off would be spent helping out on the estate’s farm where his fascination with nature grew. After travelling South America and long stints away from home, the chance to demonstrate his own craft, without sacrificing family life, drew him to the Beehive Thorner. Now residing in North Leeds, he’s able to enjoy long walks on Meanwood Valley Ridge, where, much to the exasperation of his girlfriend, just yesterday he spotted a hazelnut tree.

Sure enough, those ingredients and influences close to Alex’s heart emerge from the menu. Cress picked in Thorner village sprouts from a sloping bowl of pea-green risoni, a moreish Italian orzo pasta. As if scooped from a flower bed the dish is scattered with a soily black crumb, strong with kalamata olive, and decorated with bright petals and soft mounds of homemade ricotta. Reminiscent too of the land itself, a trio of golden beef shin croquettes chew into a burnt chive mayonnaise and sharp horseradish foam, topped with slivers of pink pickled radish. Alex is clearly adept at the yin and yang of cookery, balancing unctuous fat with puckering acidity.

There’s a thirty-eight day aged sirloin, served with a puree infused with milky roasted potato skins, and a beef and bone marrow jus. On the larger plates, buttery pan-seared seabass is offset with fragrant fennel and sour soused cherry tomatoes. For something sweet, a perfect melt-in-the-middle chocolate fondant rises from a silky pool of coffee anglaise, bobbing with biscotti. Boulders of Denholme Apiary honeycomb are practically glued to the plate with blond slicks of honey. In the middle, white shards of toasted hazelnut encase the creamiest house cultured yoghurt, finished with dots of preserved raspberry jam and wild bee pollen.

Although the Chef’s sights are set on accolades, Alex insists the Beehive, Thorner will always offer value for money. Foraged ingredients aren’t factored into their kitchen costs, which Alex sees as his gift to the customer. He’s also keen to keep personally serving each table with at least one dish, to listen to feedback and make diners feel special, an ethos he learnt to embrace during his time at L’Enclume. Quite literally buzzing to execute his new menu, which is planned to launch in September, watch this space as The Beehive, Thorner attracts some serious attention.