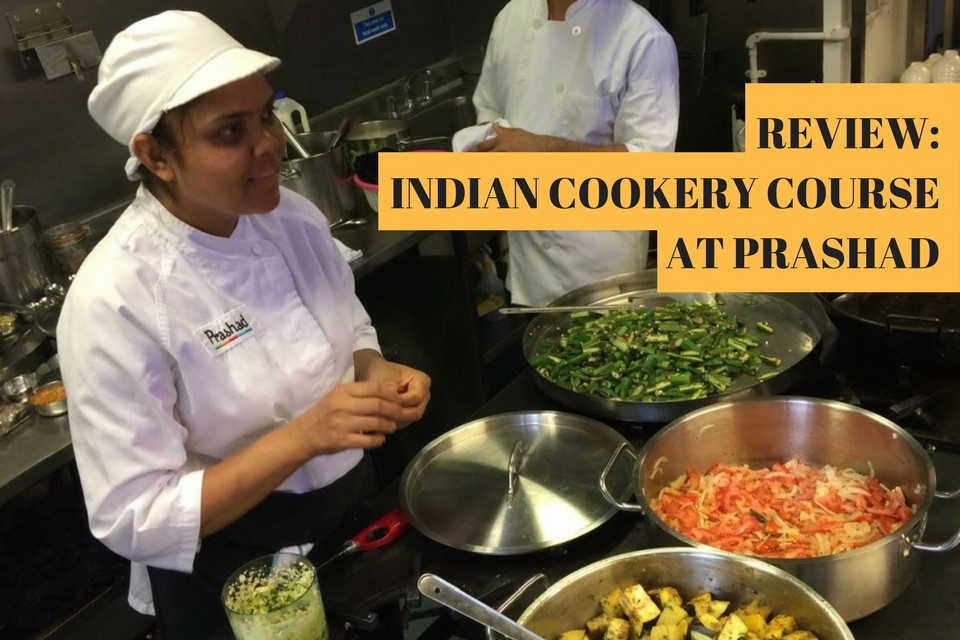 From the Patel family’s small deli run from the back of a laundrette in Lidget Green, serving homemade samosas to the taxi drivers of Bradford, Prashad, meaning ‘blessed food’, was born.

Now with Gordon Ramsay’s endorsement, a host of awards including 2AA Rosettes under their belt, Prashad‘s 70 cover restaurant in Drighlington Bradford, offers a unique demonstration cookery course with head chef Minal and her husband, front of house manager, Bobby. 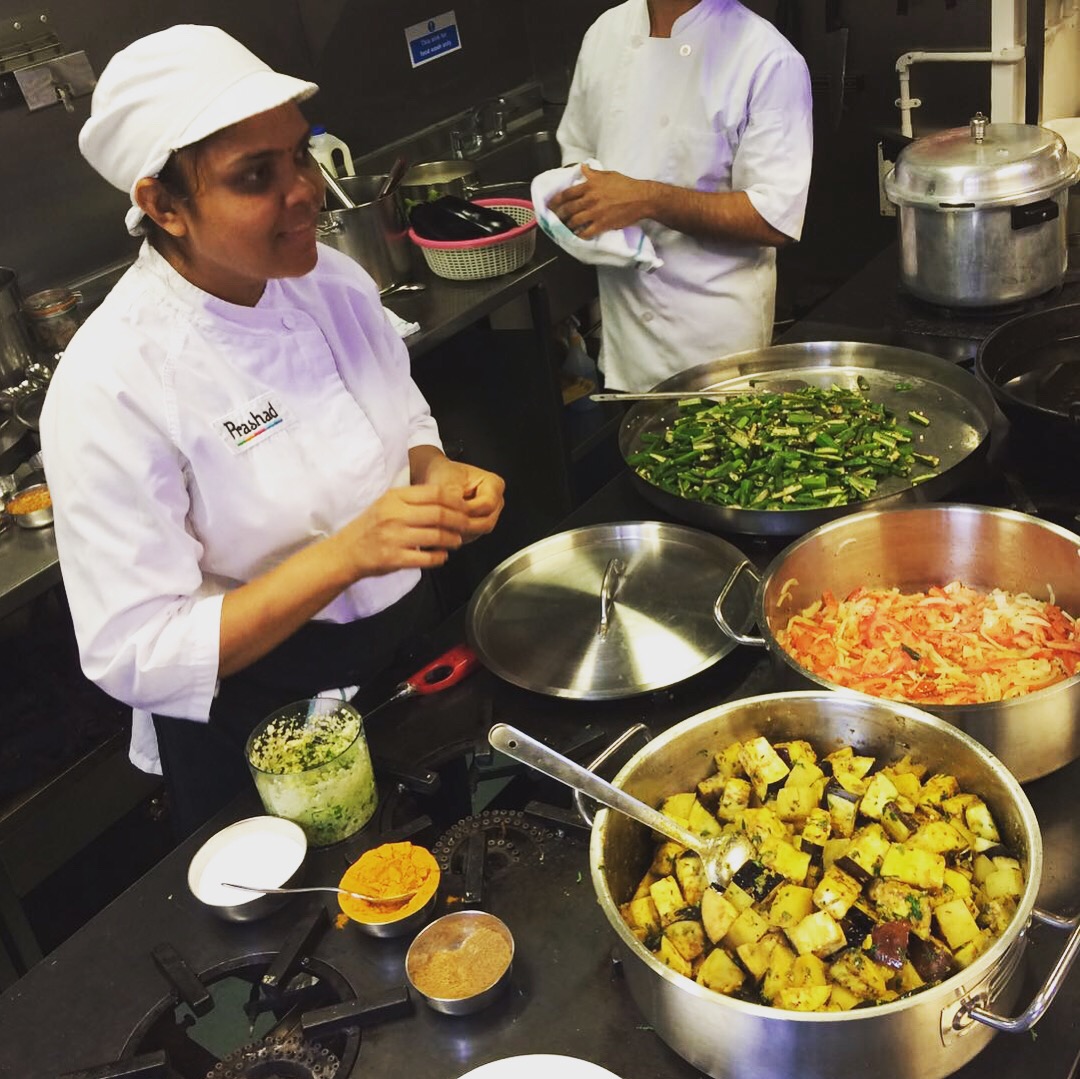 Back in their early days, if you’d booked in for an evening meal, you used to have to sit in a neighbour’s living room across the road until you were called over to dine, and wonderfully this demo still feels like you are being welcomed into the Patel’s home, so warm and friendly are the couple. The morning features a host of dishes on offer at the restaurant, but that also appear in their new book ‘Prashad At Home,’ and they’ll provide a handy sheet with the page numbers for each recipe, so you can follow along in Minal’s kitchen, and then recreate for friends and family at home.

Early on we learnt one of the secrets of authentic Indian cooking, married with Prashad’s ethos in ensuring everything on site is made from scratch. Minal uses her mini food processor to whizz up a basic chilli, garlic and ginger paste fresh for each and every dish, where she could easily have a batch on hand to dip in and out of. Tip 1: Invest in a mini chopper – these three staple ingredients went into about everything created during the demo. 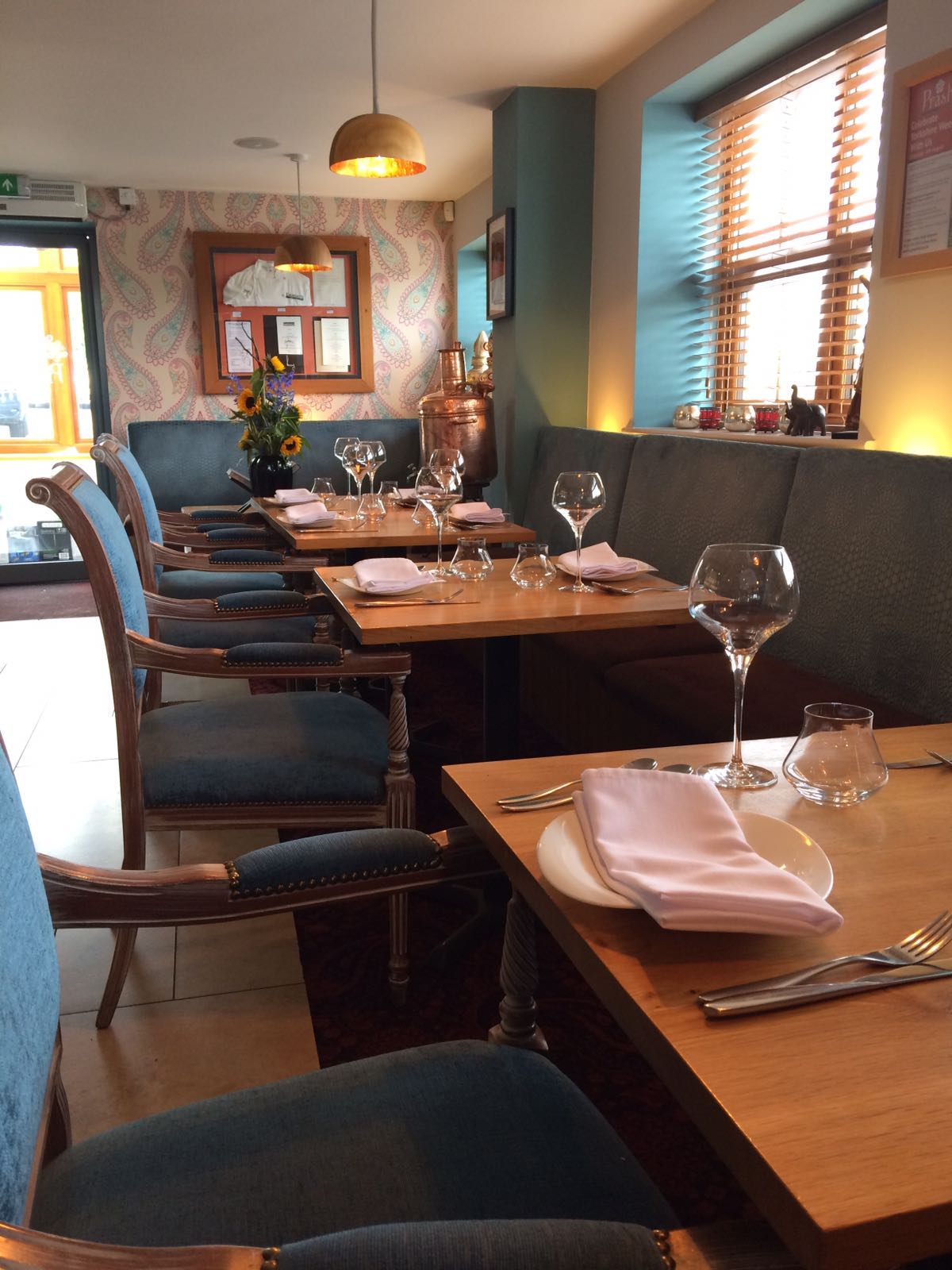 It’s a delight to be in a professional kitchen with a backstage view of how things work. Prashad is entirely Vegetarian with the Patels hailing from Gujarat in North West India, so they really know their veg and how to get most out of fresh produce. Tip 2: Texture is key in vegetarian food, and understandably so. No sadder wilting Saag Aloo’s for your veggie friend at the local curry house, bring them to Bradford, they’ll be blown away.

The couple has a wealth of knowledge about Gujarati cuisine, clued up on the medicinal properties of each spice and ingredient, imparting the food traditions ingrained in their heritage.  Not surprisingly Prashad has their own blend of garam masala, rich and cinnamonny, which they gently heat for a week, before returning to their millers in Leicester for grinding. Tip 3: If you want the best grade of spice, head to the Midlands! During the demo you’ll be introduced to some exciting new additions to your pantry, like carom seeds, jaggery and asafoetida, all now readily available at large supermarkets or Asian grocer. All of which will take your Indian cooking to the next level. I learnt how to properly soak that block of tamarind that’s been at the back of my cupboard for months, how to strain out the tough white root, and when to add spices to the pan, Tip 4: Mostly when it’s off the heat. I agreed with the others attending the demo, some of which had travelled from the outer edges of Yorkshire, (some pushed by their wives to bring some skills home!), that we wouldn’t have dreamt of attempting the complicated looking Bheta Patra recipe. After resting the Patra batter which Minal weighed out in front of us, it was our turn get stuck in, layering the flat colocasia leaves and the batter mixture with our hands, before folding and steaming them in the pan. Nods all round with an eager confidence to attempt this in our own kitchen. Tip 5: Don’t have breakfast. The patra parcels were served up within an hour of us being there, along with a flattened rice and potato side dish, and milky sweet ginger tea. Tasting Minal’s (and a bit of our) efforts, we were invited to sit in the restaurant where Bobby will make a point of serving you like guests. However this is just the start of the day’s eating, as next it’s back into the kitchen for dahl, and not one but two curries, learning that tricky water to rice ratio, and how to make the ultimate raita. No resting on your laurels though, as we hand-rolled our own puri’s, some decidedly rounder than others, and watched them puff up in the pan. 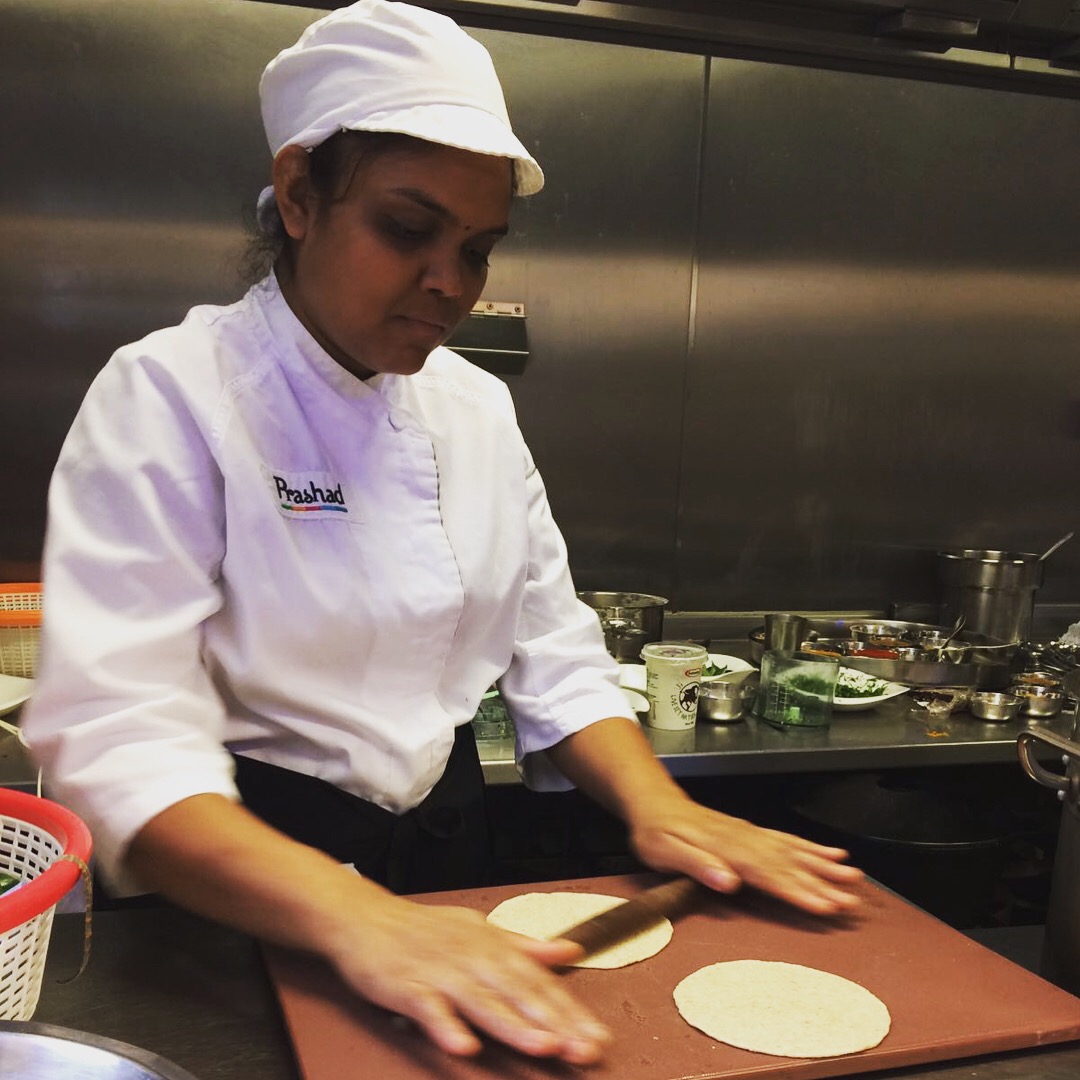 What’s nice about their kitchen, and how we were encouraged to use the cookery book, is a real sense of freedom with the recipes. Minal mixed and matched flavours and substituted ingredients just as you would at home, making everything feel totally accessible. For example; you can easily use less chilli if you’re cooking for children, in the restaurant they don’t use any peanuts, but the recipes do, so you can peanut to your heart’s content at home, if you can’t get colocasia, use chard. One participant even mentioned that garlic made him hyperactive, so Minal suggested alternatives to use such as chives, which he scribbled away happily in his book. 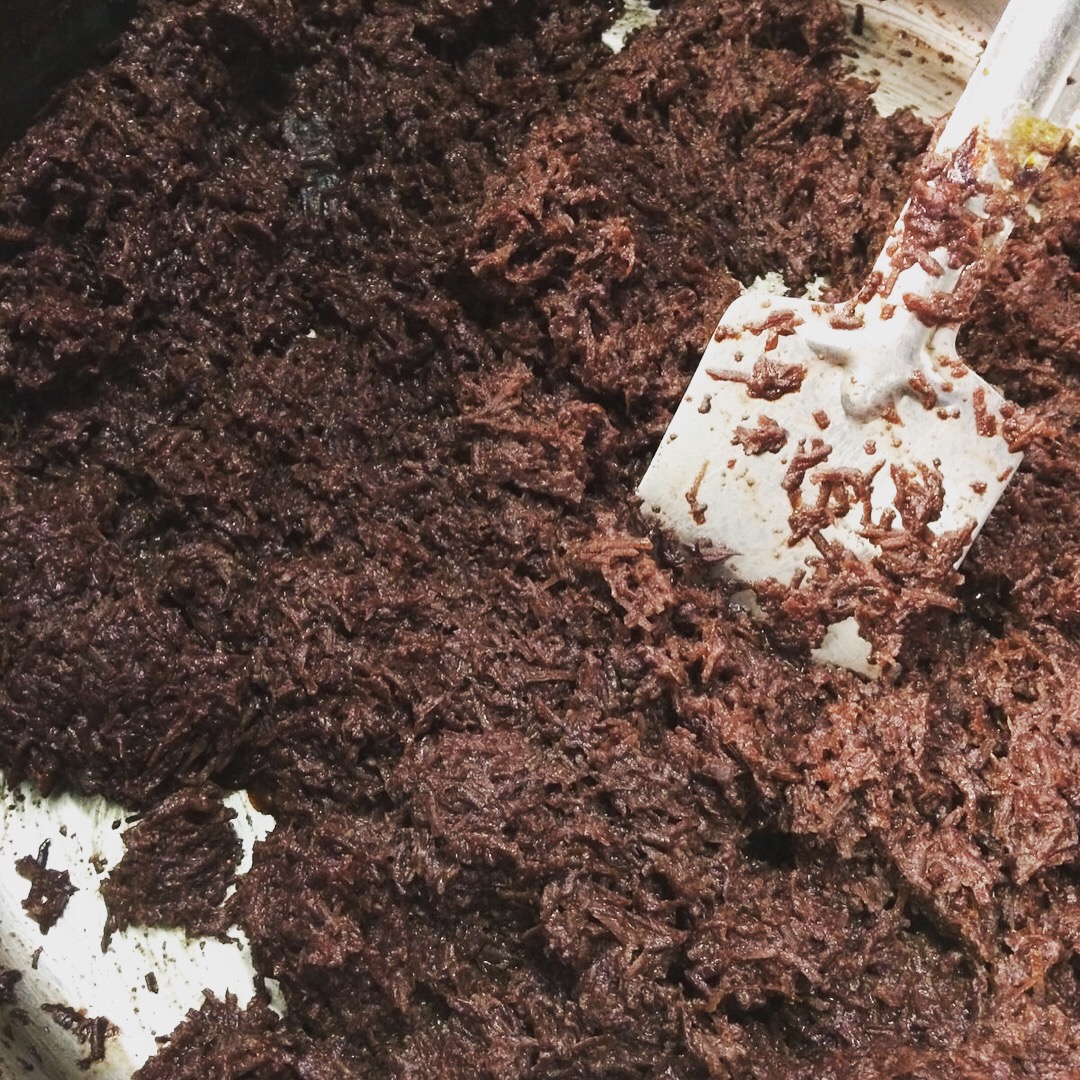 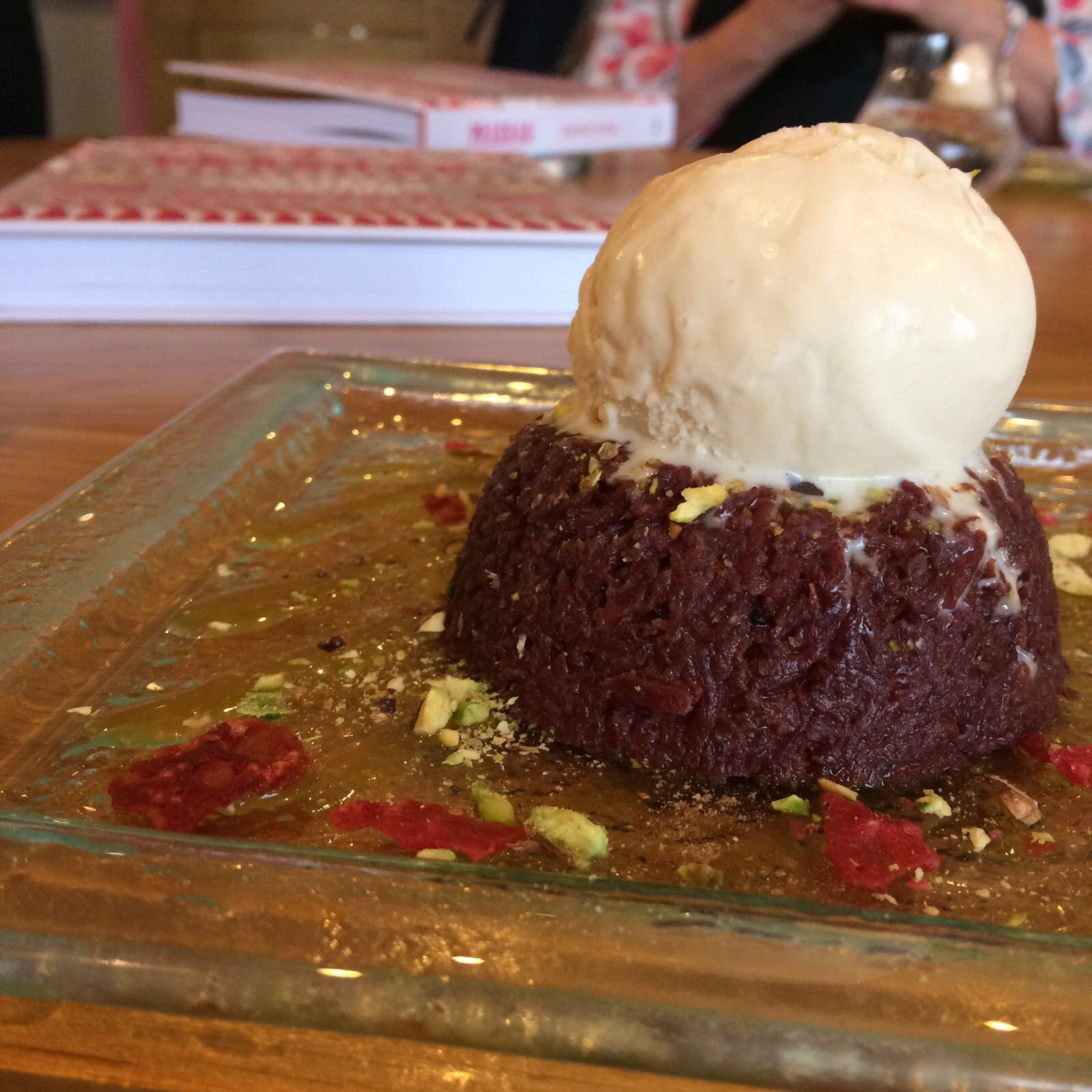 Sitting down again to a delicious lunch, where you may be treated to a craft beer from their brother’s city centre restaurant Bundobust, you’ll hear some charming anecdotes, a bit about Prashad’s background, and have a chance to relax, enjoy the food, and ask any questions. When you think you can’t possibly fit any more in, there’s pudding. From an abundance of huge purple carrots, which were promptly grated, Minal made one of Prashad’s signature desserts, Gajar Halwa, steeped in whole milk, sugar and cardamon. I will certainly be trying this one out at home, but will miss Minal’s own cinnamon ice cream, which was beautifully presented alongside the Halwa, with sprinkled pistachios and tangy raspberry crisps.

You’ll leave full in belly and inspiration, and not only do you get to take away their wonderful cookbook, but the remains of each dish from the session, carefully packed up for you to enjoy over the next few days. So busy are the small team at Prashad, that they only have time for one or two of these cookery demonstrations a month, and with only seven spaces available, book early to avoid disappointment.

Get your copy of Prashad at Home: Everyday Indian Cooking