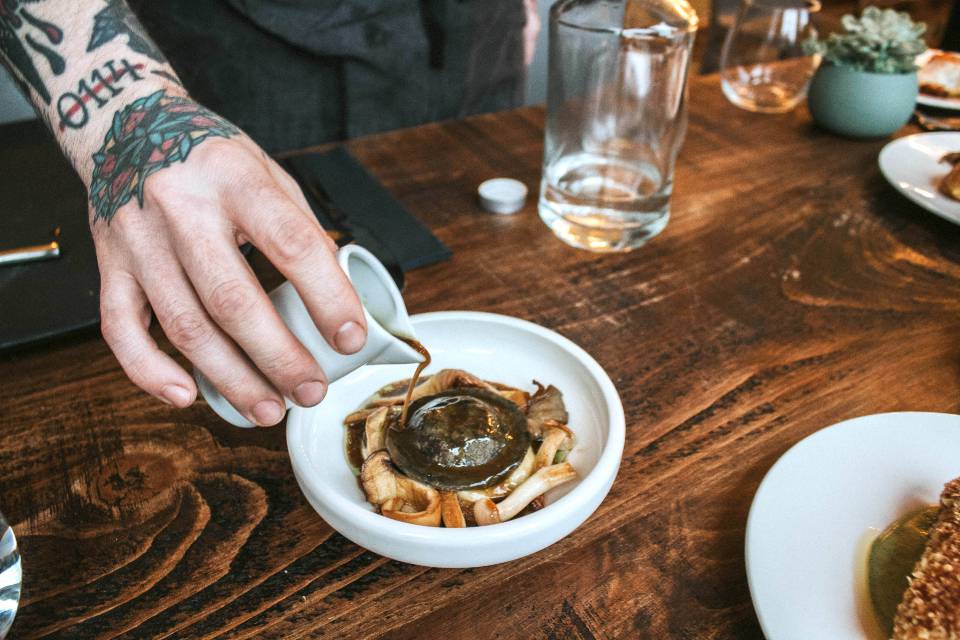 In an age of e-commerce and mobile transactions, ‘The Teller’ is a slowly dwindling profession. But one former Midland Bank on Sheffield’s Abbeydale Road is investing in genuine customer service, alongside some of the best dishes on the market. 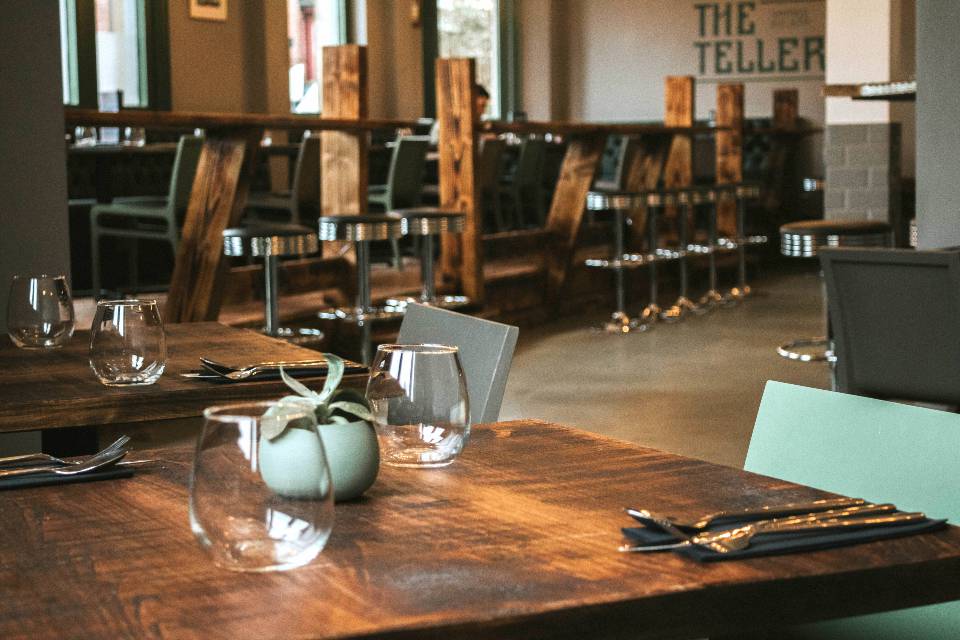 Via a quick Instagram message, best friends Alec Stephens and Andy Mastin invited local chef Sam Armitage to help them turn the corner of Sheldon Road into a culinary destination. Battling asbestos, the team took months stripping out remnants of the former businesses, removing the heavy armoured lift, and knocking through walls to remodel The Teller Sheffield for purpose. The kitchen was once the old bank manager’s flat, the vaults, now their wine cellar. 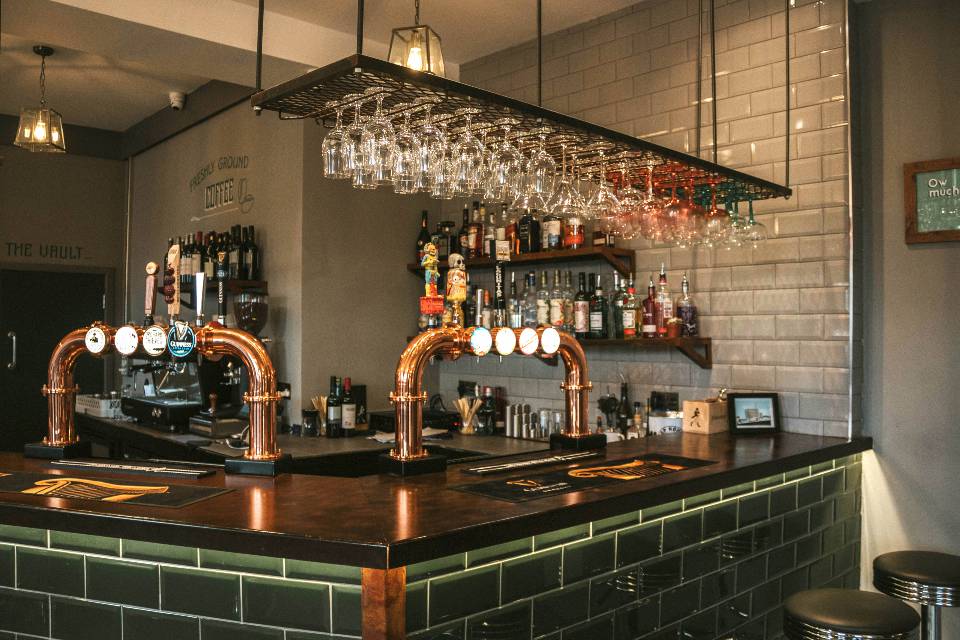 The design is subtly reminiscent, with bottle green leather seating, brushed wooden tables and brass taps above a glazed tile bar. Despite opening later than planned, The Teller stormed the Christmas period and have been booked up every weekend in January. “We’re making a good noise within the industry”, Armitage acknowledges, as we sit down with him before service, “We’re a chain of independents, and it’s a nice little night out.”

He’s not wrong. Around the corner, Swedish cafe Krydda serves smorgasbords of house-smoked salmon and cinnamon buns, there’s cocktails at Mastin’s former Gin Bar, VintEdge opposite, and real ales from Two Thirds next door. “We want to be that foodie place,” he continues, finally happy with the standard of cooking from his small team.

At 22, Armitage became The Milestone’s youngest head chef, with time also spend working at Michelin-Starred Fischer’s Baslow Hall, The Devonshire Arms, and hyper-seasonal Jöro in the city centre. Gareth Evans joins him in the kitchen from Ambulo at the Millennium Gallery, and his apprentices Kaden Smith and Louis Milton are also from a fine-dining background. “What we want to do, is cook the amazing food we cooked in those establishments, but in a bulls***t free setting…so we don’t have table-cloths, we don’t have a bazillion sets of cutlery. It’s nice, but it’s accessible”. 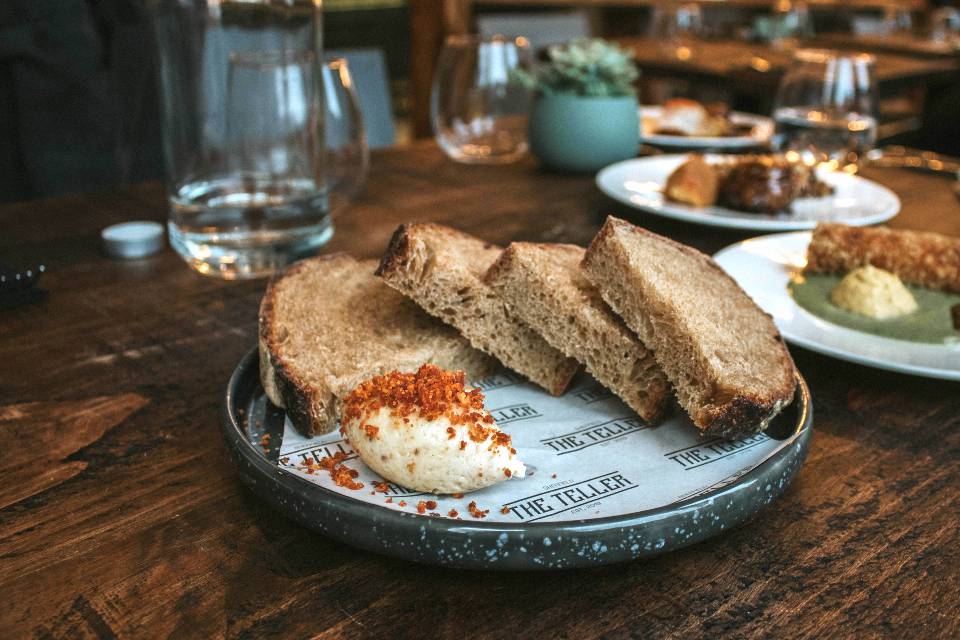 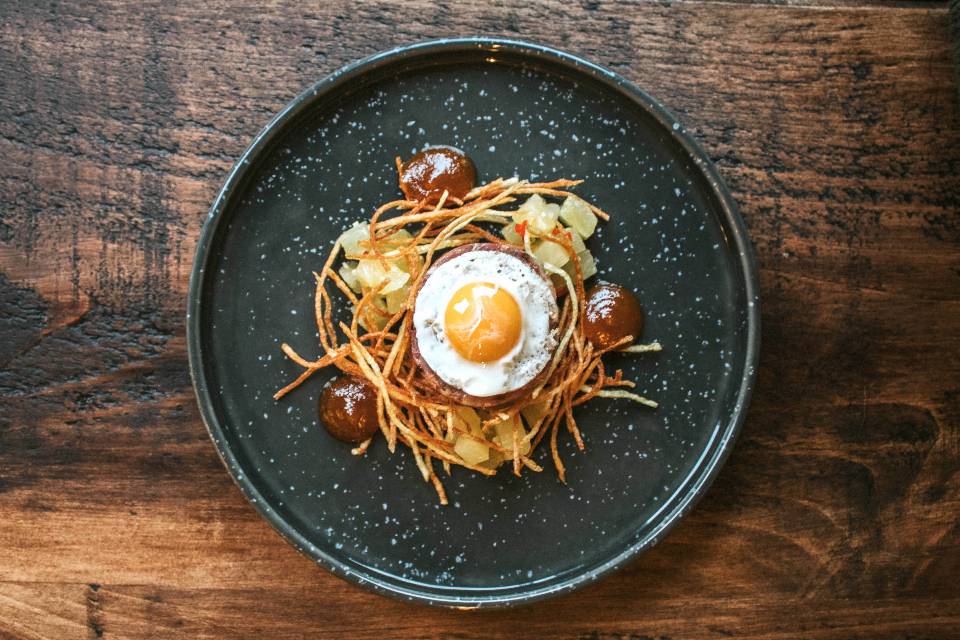 The Teller Sheffield menu caters to its audience. There’s ham, egg and chips, but this is no greasy spoon. A soft mound of mustard glazed ham hock sits under the tiniest fried quails egg, wrapped in a nest of straw fries and pineapple salsa. Handmade scampi comes with a warm tartare sauce and puffed caper berries. He reels off processes as if reading the back of a cereal packet. There’s a sense he’s really found his identity through this cooking, drawing on “the three lads” skills, in what sounds like the most democratic workplace around. “I run my kitchen slightly differently, currently no one has a rank, and we’re all just chefs. It’s collaborative, which translates to a great energy in the kitchen.”

The Teller’s staff culture is as sustainable as the food offering. The game on the menu is shot within a twenty-mile radius. “If we sell out of partridge one week, we have to wait until they go and shoot more partridge,” Armitage remarks, and it would seem we’re in luck today. Sous vide partridge breast is glazed and rolled in crispy alliums, with the legs made into a killer faggot, served with a comforting spoonful of neeps and tatties. Launching with autumnal pumpkins and artichokes, as the season changes, so does the food. “It’s what I believe in,” Armitage says, “you should be reducing your food miles, using responsibly sourced ingredients, knowing where your food comes from, and that’s what we want to reflect in the experience with the customer.” 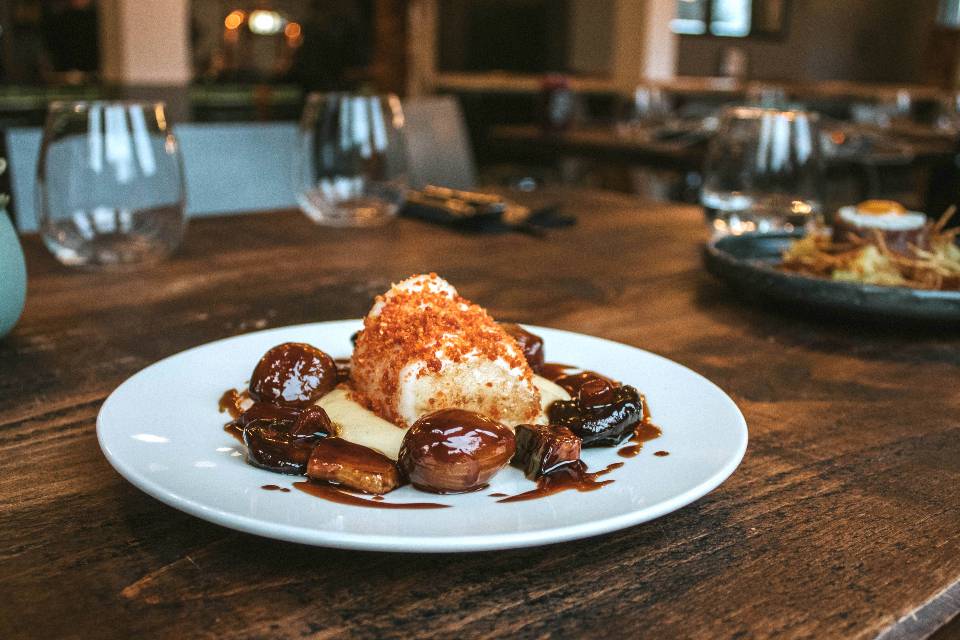 We try a fantastic example in the halibut bourguignon, where a rich stock is reduced from leftover onion peelings. The dark malty sourdough is made from yesterday’s blitzed up loaves; wondrous slathered with a whipped pork butter. Evans explains how the mushroom ravioli has truffle and dried porcini in the pasta dough itself, on a trumpets and cep bed, drenched in beautiful tarragon and walnut oil.

For veggies, you won’t find anything masquerading as meat, no falafel, burgers, or vegan junk food. With The Teller’s market research taken from the Mum’s of Sheffield’s Sling Library, the chefs have used their knowledge to celebrate what’s grown locally, and quality isn’t compromised.

Sundays are a family affair. First up, the table receives a complimentary plate of snacks; think confit onion hummus with Kaden’s chickpea flatbreads, a crunchy scratching, made for smoked potato mayo. Everyone then chooses a main; expect slow roasted ribeye, with a burnt onion puree and braised sticky short rib, porchetta, or vegan haggis wellington, alongside a giant Yorkie and roast potatoes. Tuck into any sides you like and fill your boots with a litre of gravy. “We’ve never been asked for more gravy” Armitage states proudly, and in a brief, and well-earned moment of arrogance, he declares theirs as “one of the best Sunday roasts in Sheffield.” 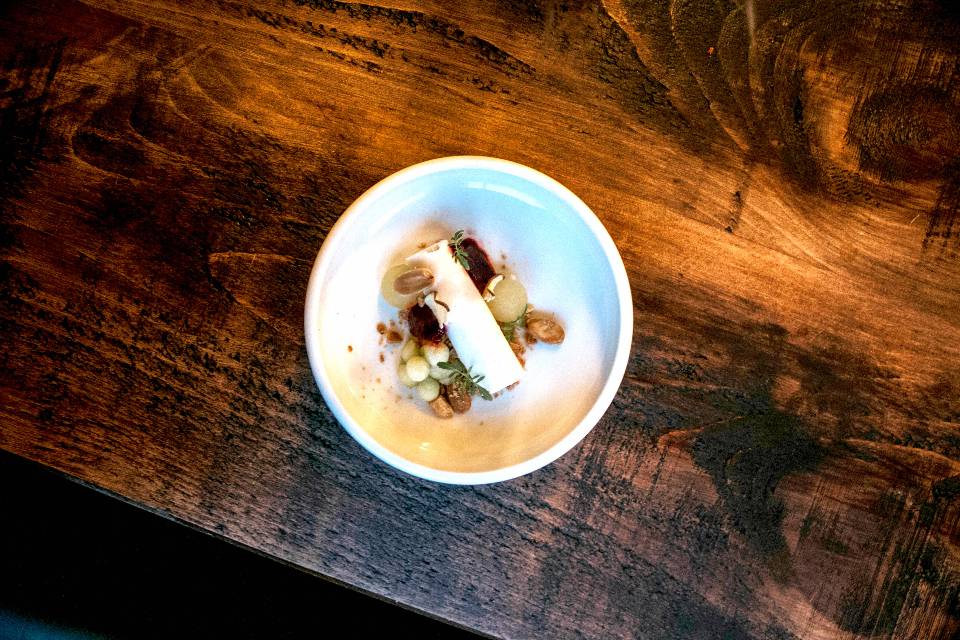 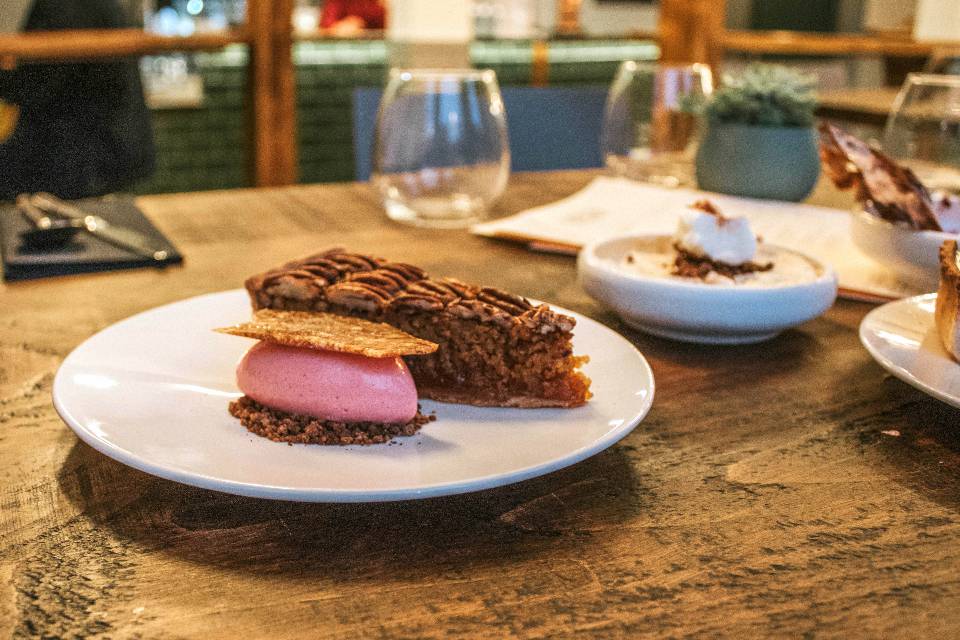 The plan is to stock more artisanal drinks on the bar to reflect the menu. Armitage’s Uncle has just planted an orchard and makes his own sparkling perries and apple wine, his beehives too will supply honey to the restaurant. They’ll be running an early bird deal with 3 plates for £15 between 5 pm and 7 pm and extending Dinner service to 10 pm Friday and Saturday. “We’ve got longevity at the forefront of what we’re trying to do,” Armitage assures, “We want to be known as that place where you can go, feel comfortable, eat amazing food, and drink some nice booze with it as well.” The Teller’s commendable values, and sheer talent on display through each dish, we have no doubt they’ll do just that.